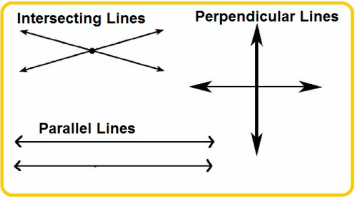 Two or more lines that meet at a point are called intersecting lines.

A transversal is two parallel lines intersected by a third line at an angle. The third line is referred to as the transversal line. When this line happens, several angles are created. You can use these angles to find the measurements of other angles.
​

​Angles Formed by Intersecting Lines
When lines intersect, there are several types of angles that are formed.  Becoming familiar with these angles will greatly help your understanding of geometry. Firstly, some terms that will benefit your learning.
​
Adjacent Angles - Two angles are Adjacent when they have a common side and a common vertex (corner point) and don't overlap.  In the diagram below (supplementary angles) angle 70 and angle 110 are adjacent to one another because they share a common side.

Straight Angles - A straight angle forms a "straight line" and is equal to 180 degrees.

In grade eight we will focus on two of these angle formations:
Angles Formed by Parallel Lines Cut by a Transversal


​Two special pairs of angles are formed in this arrangement (Alternate and Corresponding Angles):
Types of Triangles
There are 3 special names given to triangles that tell how many sides (or angles) are equal.  There may be 3, 2 or no equal sides/angles.​