Cartesian coordinates can be used to pinpoint where you are on a map or graph.  A Cartesian Coordinate plane is essentially two number lines (one vertical and one horizontal) that cross at a fixed point called the "origin" - marked on the grid as point (0,0).  Each of the individual number lines is called an axis.

Using Cartesian Coordinates you can mark a point on a graph by indicating how far to the left or right and up and down it is from the origin (0,0).

The coordinates are always written in a certain order:This is called an "ordered pair" (a pair of numbers in a special order).  The numbers in the ordered pair are separated by a comma, and parentheses are put around them to distinguish them from other points.  For example, in the diagram below, the ordered pair (4,3) is 3 units to the right of the origin and 4 units above the origin. 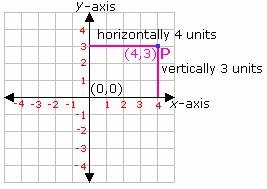 The Cartesian plane is divided into four quadrants. These are numbered from 1 through 4, starting with the upper right and going around counterclockwise (see diagram below).
Translations on a Co-ordinate Plane
A translation is a transformation of the plane that slides every point of a figure the same distance in the same direction.  When a figure is translated it remains the same or congruent.
When we TRANSLATE a figure in the coordinate plane, we add the translation amount to all the ordered pairs that make up the figure.  Remember to:

Reflections in the Co-ordinate Plane

In the second video, ignore the section on "Reflecting in a Segment" (from the 4:40 to 6:46).  Although interesting, and something that you will need to know eventually, you will not be tested on that concept in grade 8 this year.  The remainder of the video is very helpful though.

When a figure is turned about a given point, the transformation is called a rotation. The figure is rotated counterclockwise or clockwise about a fixed point.   The fixed point is called the "center of rotation."
Note: For grade , the center of rotation will always be the origin (0,0).
Rules of Rotation
As the above left image and the below left video display there are rules for rotation in a:
Clockwise Direction (CW) ​Counterclockwise Direction​ (CCW)
Review of Unit